The Northern Dispensary was built in Greenwich Village in 1831 in what was then the northernmost part of New York City (hence the clinic’s name). The city donated a triangular plot of land for the clinic with the stipulation that it provide care for the “worthy poor,” a growing population in the Village.

Through most of the 1700s, Greenwich Village was a rural outpost of fields and farms. But as the population of lower Manhattan grew, so, too, did that of the Village, spurred in part by residents fleeing the epidemic diseases of lower Manhattan, including yellow fever. As the well-off built townhouses, tradespeople moved in, many of whom couldn’t afford medical care.

Recognizing this, in 1827 a group of residents and local doctors proposed a free medical clinic. On April 27, they hammered out the dispensary’s articles of incorporation. Article 2 defined the clinic’s purpose: “To furnish medicine and medical attendance gratuitously, to such of the inhabitants as may be proper objects of this charity.…” The clinic treated 3,296 patients in its first year.

The clinics were funded by grants from the state legislature, by city funds, and through donations.

In addition to healing the poor, the clinics gave doctors the chance to study "distinct classes of disease," according to the New York Directory of Social Agencies.

Initially, the dispensary operated out of temporary facilities at various locations. But in 1831, Henry Bayard, a carpenter, and John Tucker, a mason, built the dispensary's permanent home for $4,700.

The Dispensary Through the Years 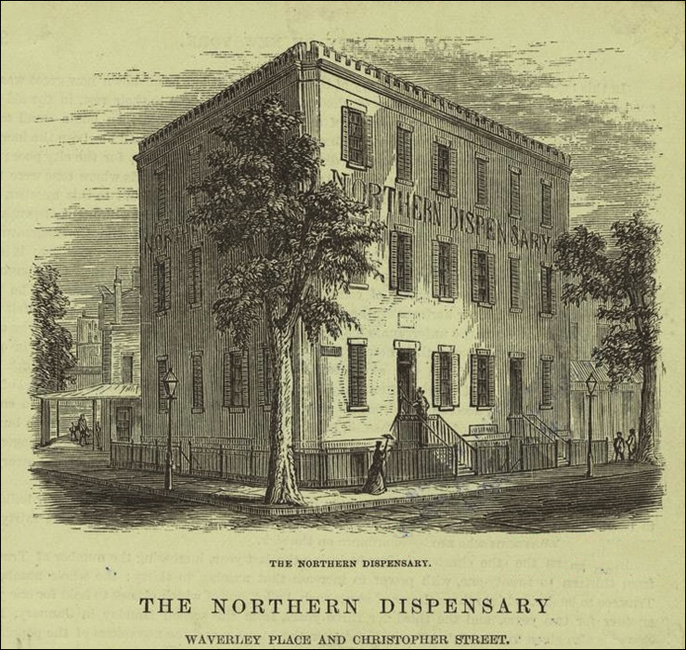 Though this engraving lacks a specific date, it was recorded as being done between 1855 and 1870. The perspecitve is the same as that in the main photo; Christopher St. is on the left, Waverly Place on the right.
Engraving © New York Public Library. 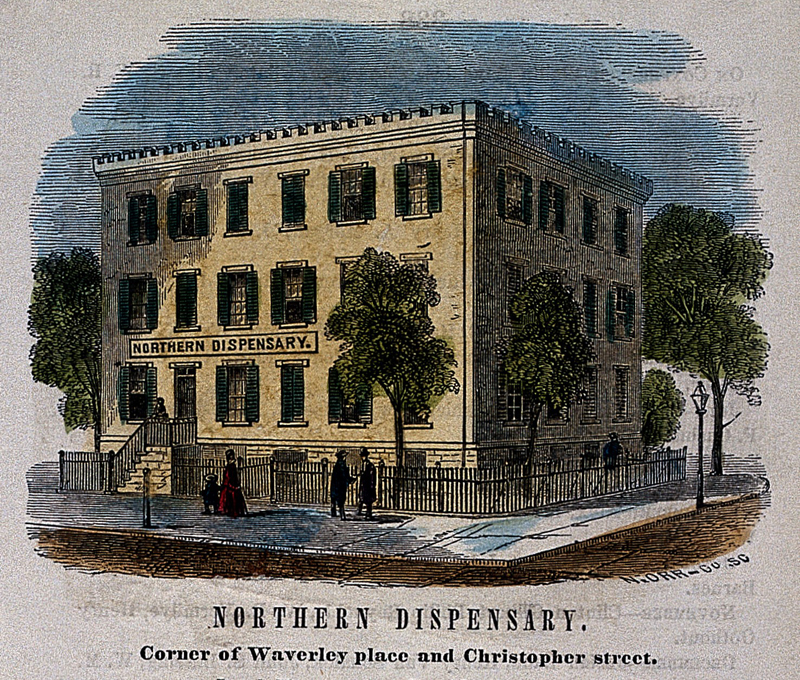 1885. The striped canopy marks the entrance to the dental clinic, located in the basement. 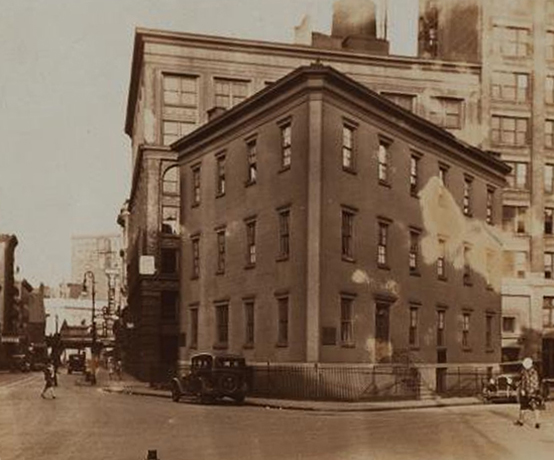 1928. Here, you can see that the roof design has changed.
Photo © New York Public Library. 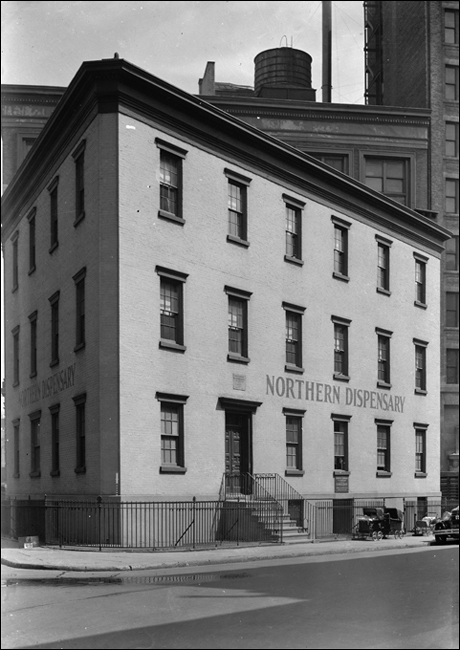 1934. This is how the dispensary loooked when architects for the Historic American Building Survey detailed its floor plans (see below).
Photo © Library of Congress.

Few historic images of the clinic's interior remain. This 1916 photo shows a child being treated.
An interior shot of the first-floor waiting room. Architects recorded the dispensary's floor plans in 1934 as part of the Historic American Buildings Survey, which documented "achievements in architecture, engineering, and landscape design."
The dispensary’s triangular Neo-Georgian design has the unique distinction of having two sides on the same street, the result of a street renaming.
By 1855, the number of patients the Dispensary treated had grown so large that the trustees added a third story to the building. You can see a slight change in the color of the bricks where the floor was added.

The dispensary cared for the city’s poor and sick primarily as inpatients until 1920, when outpatients outnumbered inpatients.

In 1986, writer and local resident George Whitmore was refused dental treatment because he had AIDS. Whitmore sued the dispensary, and the city’s Human Rights Commission fined the clinic $47,000. In May 1989, the clinic announced that it was closing because of financial pressure. The Roman Catholic Diocese of New York bought the building in 1990 with the intention of turning it into a nursing home for AIDS patients, but residents protested and the plan was abandoned. In 1998, the Archdiocese of New York sold the building to William Gottleib, a well-known but reclusive investor in Greenwich Village real estate with a history of warehousing buildings.

While that meant that some of his buildings became shabby with neglect, warehousing had a positive side, too. Andrew Berman, executive director of the Greenwich Village Society for Historic Preservation, told the New York Post, “Without a doubt, had it not been for Bill Gottlieb, there’s a lot of buildings in the West Village and Meatpacking District that would have been torn down and replaced with sort of very generic and forgettable new construction, but instead kind of lived to face another day.”

Gottleib continued his habit of warehousing with the dispensary, which has been vacant since 1999. In the fall of 2016, however, the Dispensary's windows were covered in paper (see first image) and workmen could be heard inside, though whether they were simply maintaining the building to comply with building codes or renovating it is unknown.